Once again, from Redmon, coinciding with the end of its fiscal year, Microsoft has chosen the best partners in the world from among, this time, more than 2,800 nominations .

The winners, who have just met a few days ago, will receive the awards in Washington DC during the Microsoft World Partner Conference, which this year is renamed Microsoft Inspire.

For the successes that Softeng accumulates year after year and for the extraordinary result of this one in particular in each one of the parameters with which Microsoft measures to its partners (technological competences, certified engineers, excellence in the services, realized projects, degree of Innovation, sales and customer satisfaction), even though we had many expectations placed on our nomination to win the prize in the category of Best Partner of Spain , finally the balance was biased in favor of another company.

Although the news initially fell to us like a jug of cold water, bearing in mind that the winner, Avanade, is a multinational company of several orders of magnitude greater than Softeng (only in Spain has more than 500 employees) and we have Managed to be one of the 3 finalists chosen from fourteen national nominations from a total of 5,500 partners in Spain, we understood that we also had to rejoice and value achievement.

And taking stock, ... well .. we have 12 round months !! Last October the Microsoft subsidiary in Spain awarded us the Best Partner Cloud award of 2016 For the excellence of our services in the cloud, last February our partner and partner Inma Rasero received an award for her outstanding work as a commercial consultant and now we have been finalists for an international award . Not bad !!

So, for all that, YES , despite not having won this award, we consider it an achievement to have been finalists and we are pleased and proud that Softeng has established itself as a recognized specialist in digitally transforming companies using the cloud Of Microsoft through Office 365 and Azure. Undoubtedly, all this, motivates us to keep pushing to continue to overcome us day by day. 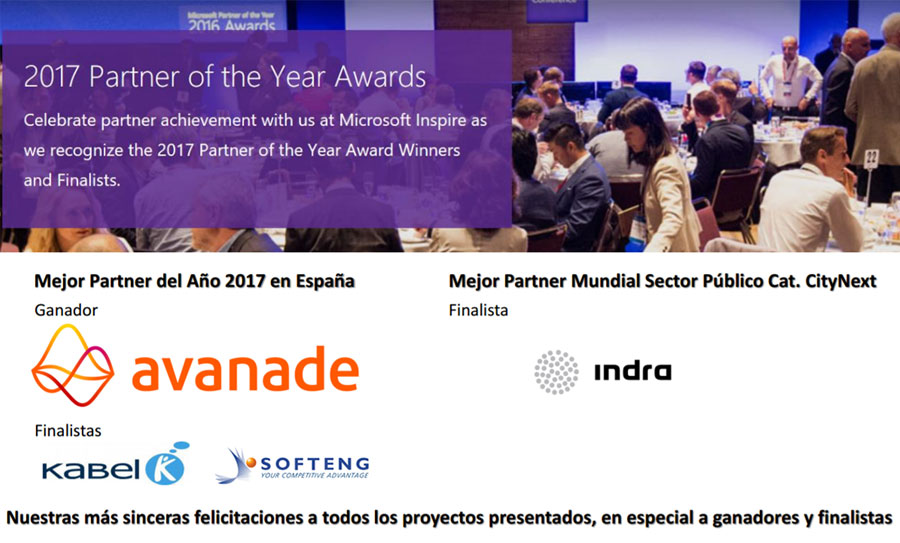